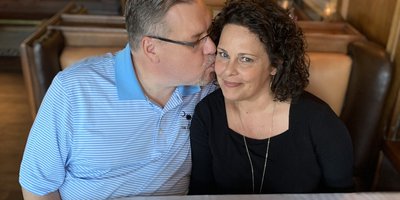 Louie and Johnna Gaunch had lived in West Virginia their entire lives. However, when they became empty nesters, God moved in their hearts to explore the Upstate of South Carolina … 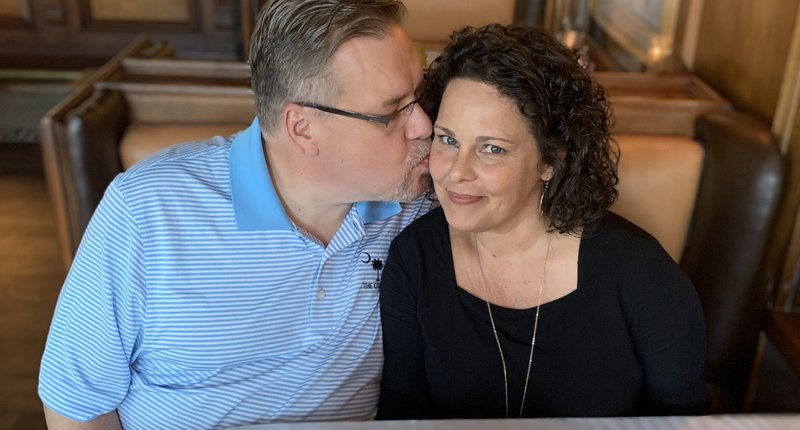 When Louie and Johnna Gaunch were in their early thirties with three young children, Louie suffered a heart attack, underwent quadruple bypass surgery, and learned that he would deal with severe heart disease for the remainder of his life. It was a major turning point for their family. Louie and Johnna had been struggling in their marriage, and God used this event to reorient them to what was important. They renewed their vows, reexamined their lives, and were blessed with many more years together—raising their children and seeing them move into adulthood.

Louie and Johnna had lived in West Virginia their entire lives. However, when they became empty nesters, they decided it was time to move since their children were all living out of state. God moved in their hearts to explore the Upstate of South Carolina where their oldest daughter was living. She and her husband attended Grace and were expecting their first child at the time. When Louie and Johnna visited, they fell in love with the Anderson area. They visited Grace’s Anderson campus, made some connections with staff, and began their plans to move.

Everything fell into place—they found a lot to build on, Louie was interviewing for jobs, and they were in the process of packing their belongings. In the midst of all these moving parts, on September 27, 2021, Louie had a major heart attack and died almost immediately. The following days and weeks were a blur for Johnna as she grieved and tried to process what was happening. However, she was very quickly faced with a decision. And in her heart, Johnna knew that God was calling her to do the hard thing, leave behind all that was familiar, and move to Anderson by herself.

I had to lean on God for everything. It was beyond me. I’m not courageous, I’m not talkative, I’m not a solo sort of person—and I had to be all that. My husband’s favorite passage was Joshua 1:5-7, and God has taught me so much about what it means to be courageous. It’s been our family’s anthem through all of this.

Even though God was clearly working through Johnna’s move, it was still a difficult transition. She moved into an apartment while her house was being built, and because she worked from home, she was often alone for long periods of time. However, she found support and community at church.

I sat in the back corner of the worship center week after week, month after month, and cried through the service. But I never sat there alone. I’ve been embraced by the members of the Anderson campus. Some Sundays I couldn’t talk, but they didn’t care. They created a hedge of protection around me, and I knew people were praying for me even though I didn’t ask them to.

Over time, those connections have grown into friendships, mentoring relationships, and true community. Johnna went through an Ezer study and was embraced by the women in her group. Although they were in different seasons of life and dealing with different struggles, they were all trying to find their identity. This was a major part of Johnna’s growth as she had to relearn who she was without her husband. She also joined a community group, even though it was difficult to attend alone, and found people who were willing to be known and who wanted to know her.

It’s been a little over a year since Louie’s death, and Johnna is still processing, grieving, and walking with her children through their own grief. Even though the rest of her life won’t look like she planned, she knows God is calling her to keep loving her family and serving others. More than anything, she is thankful to know God and experience his presence so clearly through her suffering.

We’ve cried and we’ve laughed, it’s been great and it’s been terrible, and I knew those things could coexist, but it’s another thing to experience it. And when I was in the midst of grief, I experienced God. It wasn’t words on a page. It wasn’t theology. I experienced his presence more than anything else. 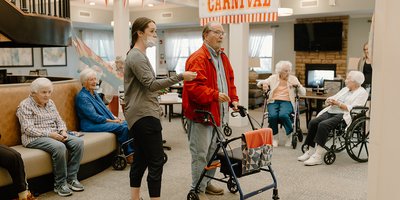 Senior Honor is our elder care ministry, and each campus partners with at least one assisted living community to host worship services and offer support on a regular basis. September … 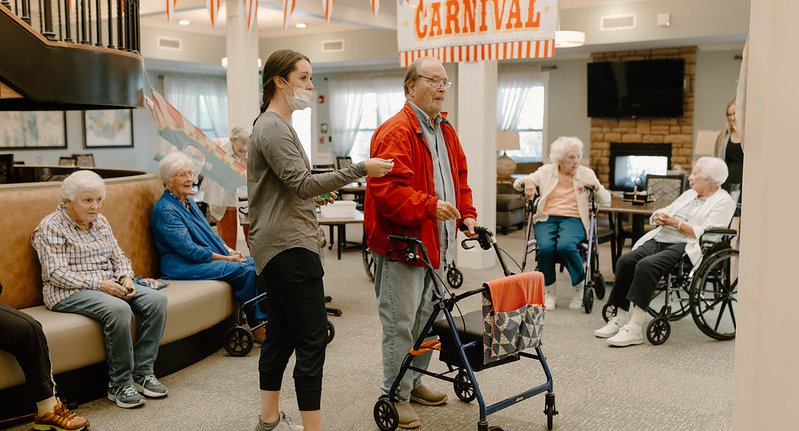 Senior Honor is our elder care ministry, and each campus partners with at least one assisted living community to host worship services and offer support on a regular basis. September 11-17 was National Assisted Living Week, and all our campuses were able to come alongside their Senior Honor partner communities and offer special encouragement.

Our Anderson campus had some especially fun treats for their partner community, Dominion Senior Living. On Monday and Tuesday, volunteers handed out journals, handwritten notes of encouragement, and candy to staff and residents. Another day, a volunteer helped facilitate Bingo and hand out prizes supplied by Grace. And on Thursday, volunteers hosted a carnival! Residents played games, enjoyed carnival themed treats, and especially enjoyed connecting with some of our younger volunteers. A catered lunch was provided on Friday to cap off the week.

One volunteer had this to say about serving during this special week:

The staff who I knew thanked us profusely with tears in their eyes. They said all the little things (signs, candy bars, handwritten notes, etc) and the big things (lunch, Bingo, snack cart) lifted morale and were such an encouragement all week long. You could tell walking into the nursing home that week that there was a joyful buzz about the place. It was definitely a joy for us to serve them!

What a great opportunity to serve our community and show the love of Jesus in this tangible way. If you would like to learn more about Senior Honor or volunteer opportunities, click below. 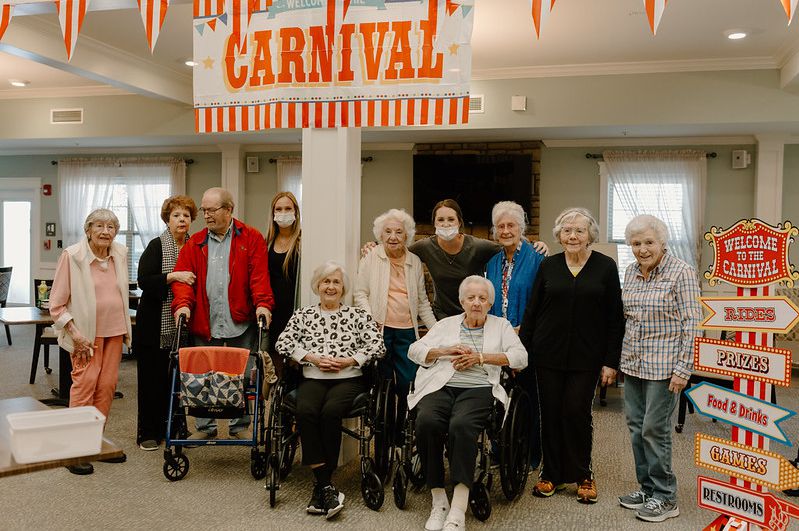 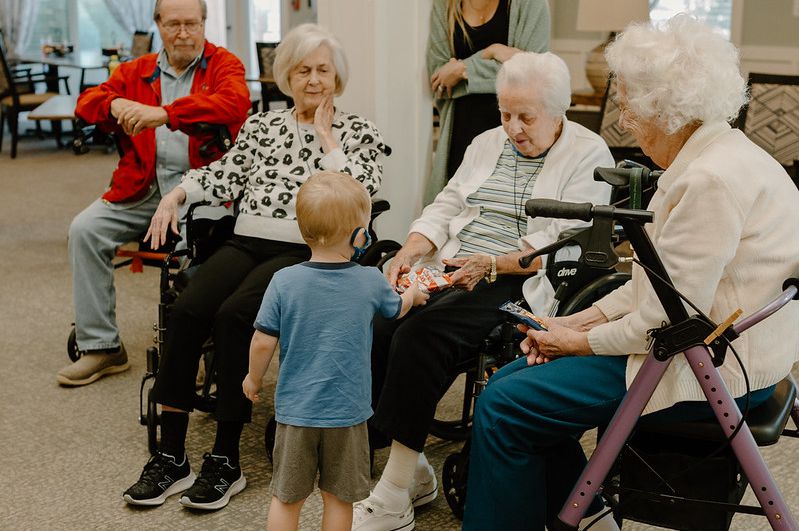 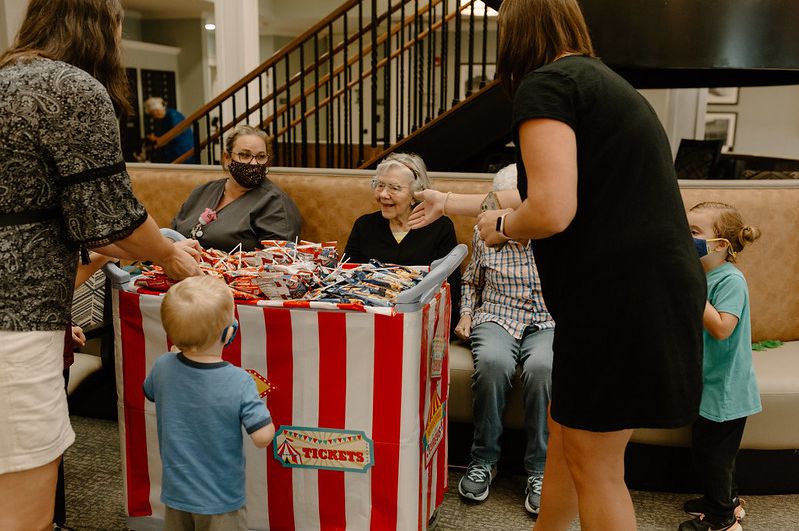 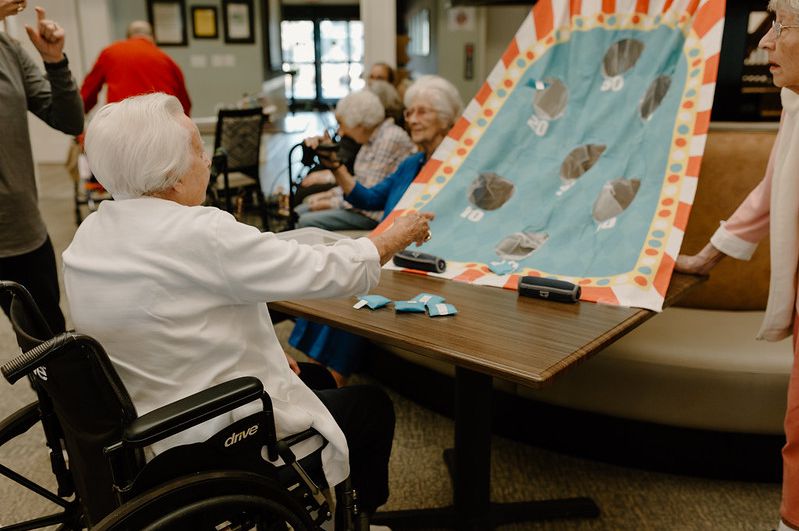 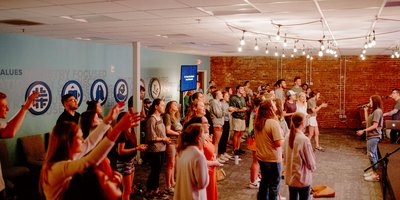 Last fall, Grace Anderson launched NEXT—a ministry designed to engage college students in a way that tethers them to the local church and grows them as followers of Christ during … 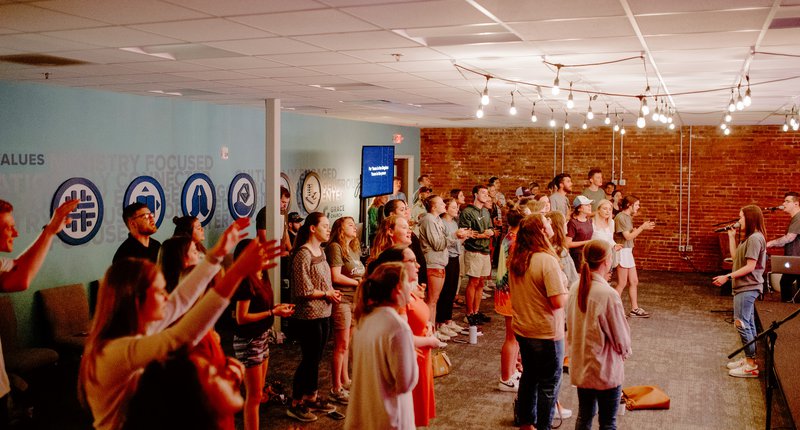 next generation anderson NEXT

Last fall, Grace Anderson launched NEXT—a ministry designed to engage college students in a way that tethers them to the local church and grows them as followers of Christ during a pivotal season of life. It has been exciting to see how this ministry has grown over its first full year.

Students from Anderson University, Clemson University, and a few other schools have come together for teaching and equipping events, as well as worship nights and times of fellowship. Each student who becomes part of NEXT gets placed into a group, and we currently have three groups of 14-16 students each. Groups are led by leaders who are in the next season of life and ready to pour into these college students.

One team of leaders had this to say about their experience:

Leading a NEXT group has been such a blessing and encouragement. In the first year of our group, we have witnessed students open up to true biblical community, become faithful serving members in the local body, and learn to study the Bible. The students who meet in our home every Tuesday have become our family!

As this school year has wrapped up, it’s been a blessing to see how God has grown this community of college students, both individually and corporately. Many have attended Discovery and are serving, and many are also moving towards membership. Please pray with us for this next generation of leaders in our churches and communities. If you want to learn more about NEXT or get involved, please email Dillon Carpenter at [email protected]. 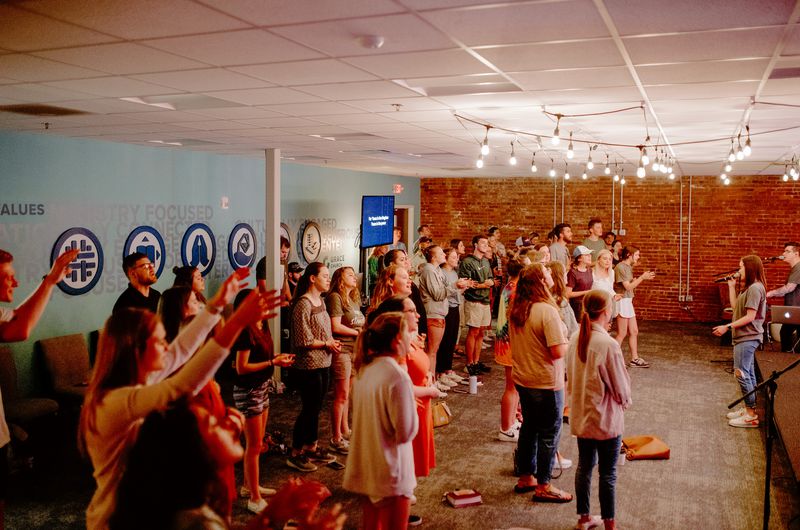 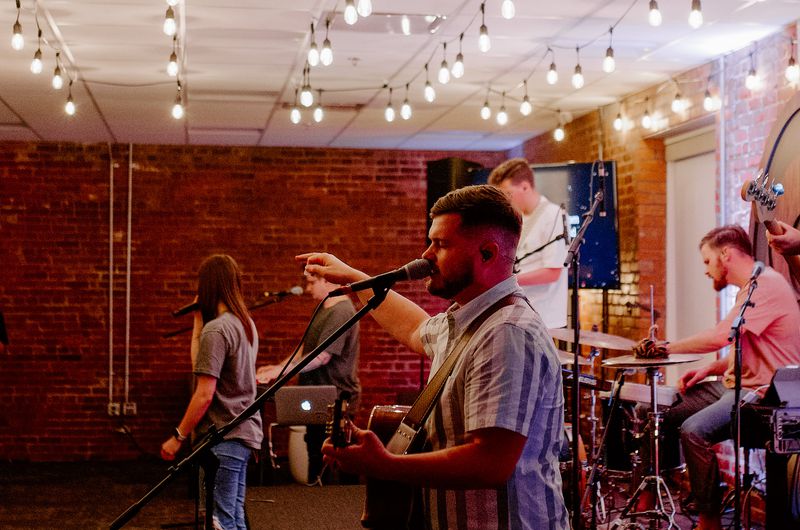 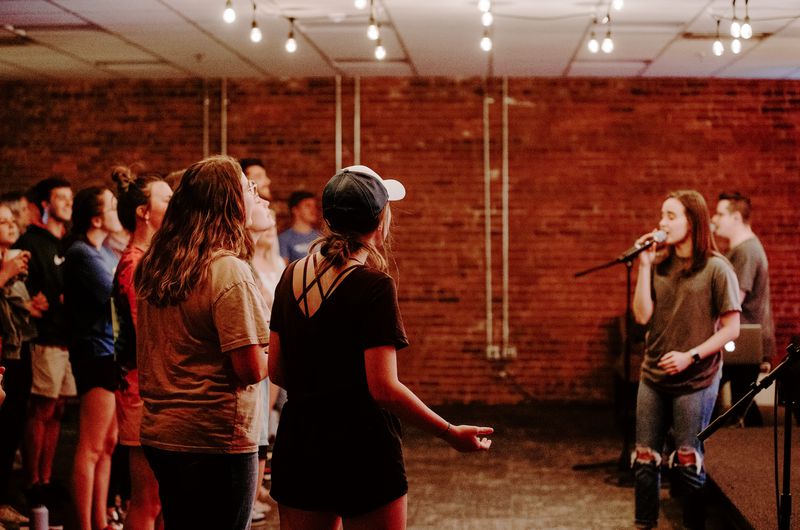 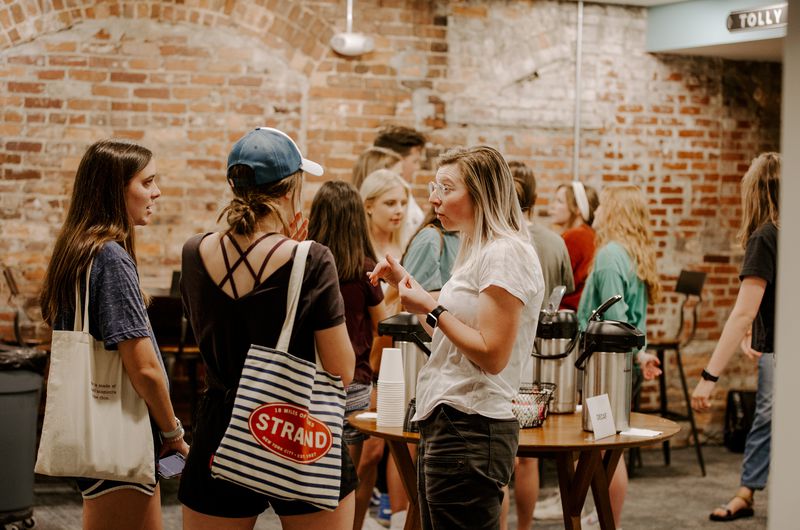 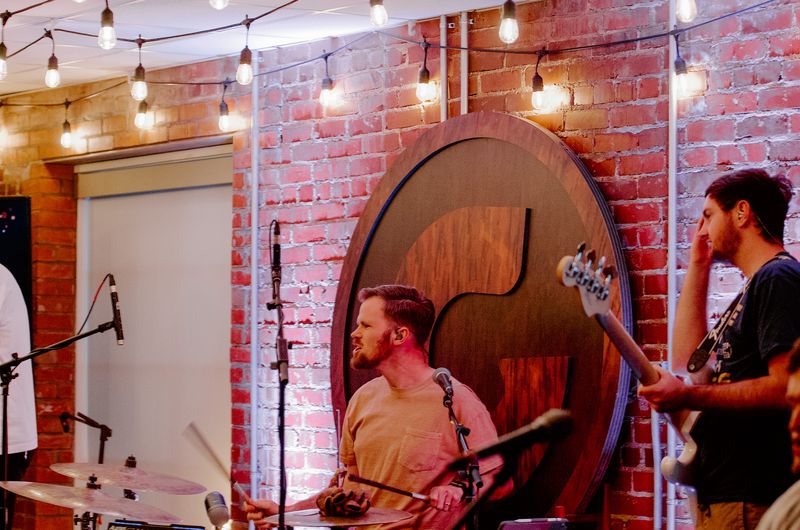